Study in the Netherlands, why not?

Speaking of tulips, the millstone thought of the beautiful Netherlands. But few know that this is the home of the famous painter Van Gogh and the canal system has become a symbol of tourism in the country.

The Netherlands is fully known as the Kingdom of the Netherlands, consisting of six islands in Aruba and the autonomous territories of the Nertherlands Antilles. Located northwest of Europe, the country covers an area of 6,500 square kilometers, with a relatively mild climate. The Dutch people are known for being friendly and environmentally friendly. The highest number of bicycle users in the world, there are about 22.3 million bicycles in the Netherlands, with an average of more than one bike per citizen.

In English, the Netherlands means "lowland", which indicates the geographical features of the land. ½ area of the Netherlands is close to sea level, a quarter of the area is below sea level, so the surrounding area is dunes and embankments. 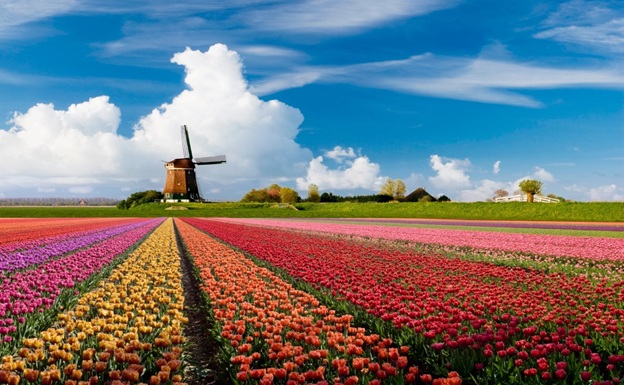 From the beginning of the 17th century, the Netherlands was a country advanced, rich thanks to the development of foreign trade. Located right in the plains where Europe's main rivers flow into the North Sea, the Netherlands is ideally positioned to be a trading and transportation hub for all Western European countries. The 17th century was the heyday of Dutch history with ships carrying 90% of European goods. Currently, the Netherlands is the sixth largest economy in the European Union and one of the top 10 Dutch export countries in the world.

With more than 190 different nationalities across the country, the Netherlands has become a multicultural nation with many unique cultural shades. Open, friendly people love freedom and specialize in self-serving spirit. Although Dutch is the main language, 90% of people speak English. In addition to Europe's most advanced economy, the Netherlands is also known for its excellent education system, quality research, and international learning environment. Going to the Netherlands to study will be an excellent opportunity for international students to have access to a leading education as well as experience the culture and lifestyle of Europe. The Netherlands is particularly well-known for its business, tourism, hospitality and high-tech industries. In addition, the two major fields of study are now well-known in the Netherlands: Logistics (Supply Chain Management) and Creative Industry (Industry).

2. International student life in the Netherlands

The government attaches great importance to tertiary education. Financial support for students from a variety of sources by reducing tuition fees or offering valuable scholarships. If you are an excellent student, you have the opportunity to receive up to 75% of the tuition fee. In addition, students can pay their own tuition fees by taking extra work on holidays with a certain amount of time. In addition, the state also allows students to borrow a fixed amount of money without paying interest. Students only pay this amount when they graduate and find a job. Schools also offer programs such as Day of International Student for foreign students to meet and exchange through group activities. 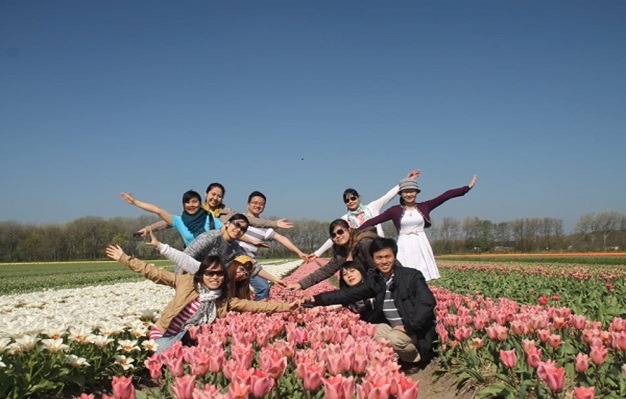 Deciding to go to a foreign country learning is not easy. It is more difficult when you have to learn to adapt to a new, different language, to become acquainted with new friends. But the Netherlands is one of the friendliest social settings in the world that you can feel as soon as you get here. People are open, welcoming foreigners with warmth and dedicated help. All over the city there are educational institutions that support foreign students in finding accommodation, finding a way, finding a hospital or answering questions about all social and cultural issues. Even in universities, such organizations work very well.

Any university in the Netherlands has a true student culture. This culture is created by a network of affiliate student associations to help students learn, entertain, and need help.

3. Why choose to study in the Netherlands?

- Excellent education quality: The Netherlands has been internationally recognized for its practicality and high application.

- All courses are in accordance with European standards and are quality assured by the government.

- Reasonable tuition fees: tuition fees in the Netherlands are usually lower than those in the US, Canada, UK ... because of higher levels of government support from the Government.

- The curriculum is entirely in English

- Combination of perfect teaching applies well between theory and practice

- International learning environment (The Netherlands is one of the countries with the highest number of students studying in Europe).

- Students have the opportunity to study and practice in a country other than the Netherlands.

- Universities in the Netherlands are always interested in international students, providing housing, organizing programs introducing the culture, country and people of the Netherlands.

- After graduation, international students can stay in the Netherlands for 1 year to work. Opening: September or February every year

However, if your English level is not satisfactory, you can take an English course at a school or center and take the TOEFL or IELTS test.

5. Study and living expenses in the Netherlands

Study fees in the Netherlands

Knowing about the cost of studying in the Netherlands is an important step in deciding if this location is appropriate for your long-term goals. The average tuition fee for a Dutch university program varies from EUR 7,000 to EUR 15,000 per year, while tuition fees for the master's program are EUR 8,000 to EUR 20,000 per year.

Cost of living in the Netherlands

Cost of living is also one of the largest expenses for studying in Holland. Student expenses include meals, travel, materials, clothing, and recreational activities. Of course, you also need to consider the cost of renting and insurance. Students study and live in the Netherlands cost about 800 - 1,100 EUR / month.

Cost of renting a house

The Netherlands is different from other European countries in that it rarely has campuses. Therefore, students often have to mobilize themselves in the search for housing, especially in big cities like Amsterdam. Often, once approved by a certain university in the Netherlands, the school will share with you information on finding a home.

Unlike many other European countries, very few students live on campus because most Dutch universities do not have a dormitory. Therefore, students have to mobilize themselves in finding housing. To save, many students live in student hostels, where you have your own room, but you have to share the kitchen and bathroom, toilet, cost about 275 - 500 EUR / month.

Other costs related to housing

It is important to keep in mind that there are other costs that are (not always) in the cost of renting. For example, before renting, you must pay a deposit (typically one month's rent), and you will be reimbursed when the contract is terminated provided that the area you are renting remains in the same condition as you did. Move to Sometimes, the previous tenant will ask if you want to redeem some of their belongings (most rooms are not equipped) and this depends on whether you want them or not. If you want, you and your previous tenant will agree on a price (you should check to see if you can afford it cheaper elsewhere).

In addition, you should also check whether gas, electricity, water, garbage and internet are included in the rent. This cost depends on the service provider and whether or not you live with other people. The cost of utilities for a 3-room apartment averages EUR 165 per month. Internet charges are EUR 23 per month.

Students living on their own spend an average of 170 EUR / month for food. The amount you pay depends on your lifestyle and thus, changes for each student. It will also change with each city. You should know that shopping in Amsterdam and Rotterdam will be more expensive than smaller cities like Groningen or Eindhoven.

The average monthly travel cost in the Netherlands is EUR 35 per month. You will save a lot on this cost if you rent a bike - a popular choice in the country. In relation to the cost of tuition, in addition to tuition, there are other costs including books and other learning aids you need to purchase. The total fee varies by course (usually around EUR 300-650 per year).

6. Some prominent universities in the Netherlands

a. University of Maastricht

The Maastricht School of Management (MSM) is located in the heart of Europe, with easy access to nearby cities such as Amsterdam, Brussels, Cologne, Frankfurt, London and Paris Europe.

MSM is one of the oldest and best-known business schools in the Netherlands.

The students of the school can learn a lot for themselves, as they work on issues that are happening in the world, at MSM. This is a learning method that will bring competitive strength to the students themselves and the organizations they participate in in life and business.

The school's MBA program is the # 2 in the Netherlands (Eduniversal's best Masters program).

And the DBA program ranked # 2 on DBAStudies.com's global rankings

Students will study and live in the city of Maastricht. In Limburg province, 170 km south of Amsterdam. VU University Amsterdam is a university supported by the State. The university has about 23,000 students and 2 500 lecturers are teaching.

The University has nearly 60 bachelor's degrees & more than 100 masters programs - VU University is a diverse choice for students. University of Amsterdam (UvA) is a university founded in 1632, with a long history. Today, the UvA is one of the largest in Europe.

In addition, UvA is ranked as one of the best research universities in the world. 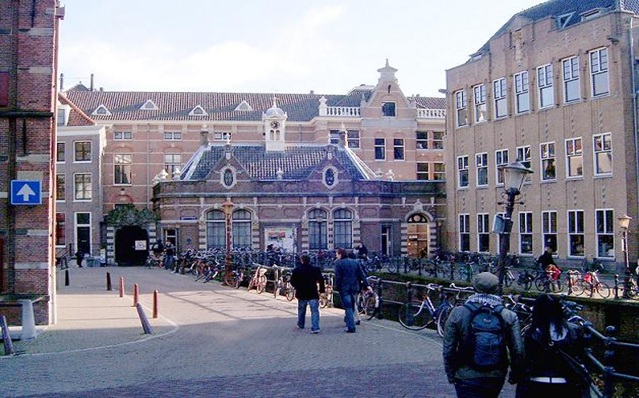 Stenden is a good quality educational institution at an affordable cost. The school's curriculum is always balanced between theory and practice. Final year students are on internships and in some academic programs, not necessarily only in final year students.

In addition, the school's curriculum is taught in English and the school also has international lecturers teaching students. 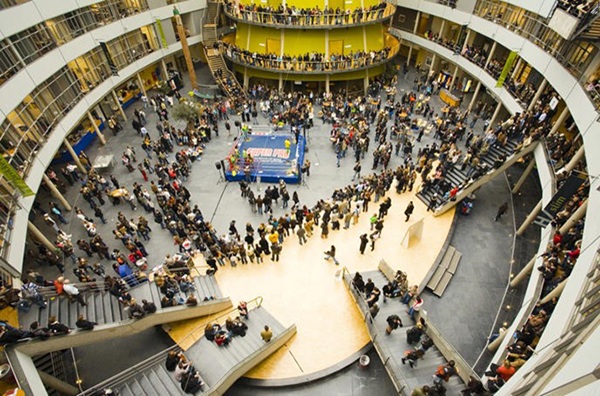 Saxion University is a public school located in the east of the Netherlands with three school districts located in the three old Dutch cities of Deventer and Enschede and Apeldoorn. Currently, the University has about 27,000 students, of whom 3,500 are international students from 55 different countries studying for Foundation, Bachelor and Masters degrees in 44 different disciplines. International programs are taught in English including business and technical subjects. Dutch and Dutch degrees are internationally recognized and most of the graduates here have a stable job in the country as well as abroad.