Good, cheap and many career opportunities in Europe in 2017

You want to study in Europe this year but do not know which country is right for you? Let the UE find answers in the Study.EU rankings on the appeal of 30 EU countries, through the three categories of Education, Life, and Career Opportunities.

The National Ranking of Study.EU 2017

Based on the needs of international students seeking high-quality educational programs, a variety of courses and the appropriate tuition rates, the ranking offers three main categories of assessment, include:

Education (max. 50 points): based on the "coverage frequency" of the nation's universities on prestigious charts (THE, QS, ARWU and US News); Indicators of teaching quality and the diversity of English language training programs.

Cost (maximum 30 points): based on the general cost of living in a country plus tuition fees for students from the European Union (EU) or the European Economic Area ( EEA) as well as with other international students. The lower the cost, the more countries will score.

Life & Career Opportunities (maximum 20 points): based on the UN's World Happiness Report; Unemployment rate at university / college level as well as English level in each locality in order to evaluate the quality of life as well as job opportunities for international students after graduation.

The score scale of the rating is 100.

Top 10 universities in the EU

In this year's ranking, thanks to its superior reputation in providing high quality training programs at many top universities, Germany surpassed the UK with a score of 83.2 / 100 and won Top spot. The UK maintains its "reputation" for academic excellence and the number of academic programs available, but it is also the most expensive country in Europe at this year's rank. Together with the United Kingdom, the Netherlands, France and Sweden, the country holds the title of "top 5", reaffirming its educational standing and appeal to global students. Next in the top 10 are Russia, Switzerland, Italy, Belgium and Norway. 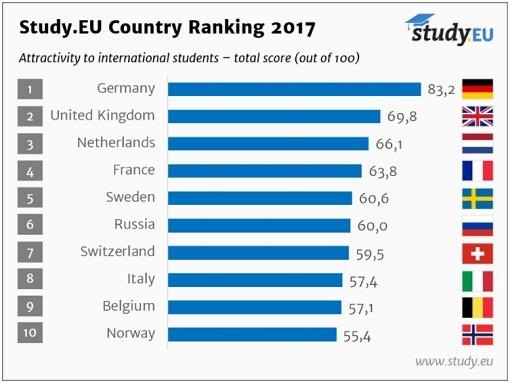 Most of the leading countries in the Education category also rank high in the rankings because they account for 50% of the total. While the UK is home to many universities named in international rankings, the Netherlands and Germany are highly valued for their teaching quality. The German government has always been keen on investing in quality education and sees it as a key development sector, reflecting the fact that over 96% of the population in Germany have completed high school. 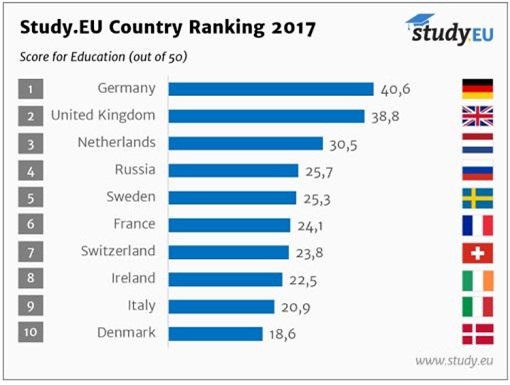 The Netherlands has been particularly successful in increasing the number of programs taught in English in recent years and also offers the most English language courses among countries where English is not a national language. . Other European countries with outstanding education are Sweden, France, Switzerland, Ireland, Italy and Denmark.

On the low cost of education, rankings have been "shed" by the presence of nations from East and Southeast Europe. Hungary and Poland are the top two countries in terms of the cost of studying "easy to breathe", providing a solid education at the cost of study. For example, the University of Debrecen (Hungary), which is listed by the World Health Organization as one of the world's recognized medical schools, is accredited by the US Department of Health and the European Union. If you enroll in the Debrecen Medical Program (6 years), the tuition fee will be $ 17,000 per year and $ 8,000 per year for the Pharmacy program. This is actually a far lower number than the cost of studying in Europe or other advanced countries.

In the top 10 countries at the top of the overall rankings, only Germany and France are still meeting the cost criteria because in these two countries, the government often offers tuition discounts and exemptions for international students. Non-European, the cost of living here is more affordable than other educational powers such as the United States, England, ... 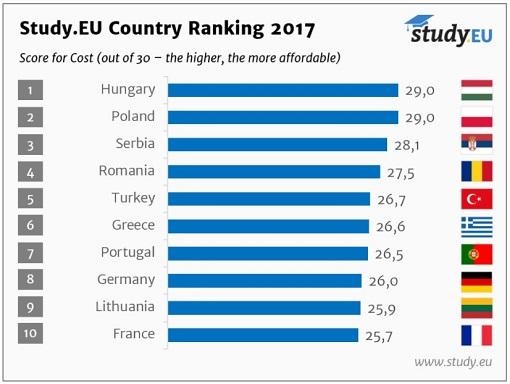 The annual cost of living of the top 10 countries in this list, including tuition, ranges from about 6,200 EUR in Hungary and Poland, to around 10,000 EUR in France. However, this is just the average cost over common ground in cities, which is likely to increase in the central and provincial capitals. Only spending EUR 10,000 per year to study in the capital Munich is clearly a big challenge for students and the more you can not handle at that cost if you choose to study in expensive Paris.

In the Life & Career category, the ranking of European countries is based on the quality of life expected by students and graduates, the degree to which they are easy to integrate into their lives. Speaks English and the opportunity to enter the local labor market after graduation.

Top 10 countries generally have a good quality of life and promise to provide high-quality graduates with employment opportunities. Topping this ranking is the UK, which has long been famous as a popular destination not only for international students but also for experienced overseas professionals who come here looking for job opportunities in the UK. An international professional environment.

Top 10 places are also dominated by Nordic countries such as Norway and Sweden - two of which are highly regarded in the UN's World Happiness Report.

In addition, Iceland, Ireland, the Netherlands, Germany, Switzerland, Denmark and Austria are also the "heavyweight candidates" that students can choose for themselves a suitable "promised land". Of these, the Netherlands has the lowest proportion of income inequality in the world, with 12.4%, or Ireland, where crime rates are ranked at the lowest level in the world thanks to security. Security is tightening.

With a policy of expanding immigration for postgraduate students, Ireland allows students to stay one year after graduation to find employment and also allow students to work more while studying (20 hours per week and 40 hours per week on vacations) with a minimum salary of 8.65 euros per hour.